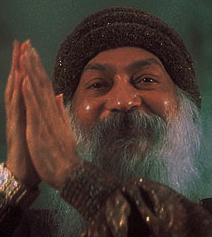 Born in India in 1931. For Osho, the truth cannot compromise, or it is no longer the truth. And truth is not a belief, but an experience. He never asks people to believe in what he says, but rather to experiment and realize for themselves whether what he is saying is true or not. After his enlightenment, at the age of twenty-one, Osho completed his academic studies and spent several years teaching philosophy at the University of Jabalpur. Meanwhile, he traveled throughout India giving lectures, challenging orthodox religious leaders in public debates, and meeting people from all social standings. He has extensively read everything he could find to expand his understanding of the belief systems and the psychology of contemporary man.

By the late 1960s, Osho began to develop his unique active meditation techniques. The modern man, he said,  is so burdened with the outmoded traditions of the past and the anxieties of modern-day living that he must go through a deep cleansing process before he can discover the thoughtless, relaxed state of meditation.

By 1974, a commune was established around Osho in Pune, India, and the trickle of visitors from the West soon became a flood. Many were therapists who were faced with the limitations of Western therapies and sought an approach that could reach and transform the depths of the human psyche. Osho encouraged them to contribute their skills to the commune and worked closely with them to develop their therapies in the context of meditation.

The problem with therapies developed in the West, he said, is that they are limited to trying to treat the mind, whereas the East has long understood that the mind itself, or rather our identification with it, is the problem. By the end of the 1970s the commune in Poona housed the largest therapy and growth center in the world, and thousands of people were coming to participate in therapy groups and meditations, to sit with Osho in his daily morning discourses and evening darshans, and to contribute to the life of the commune. Some returned to their countries and established meditation centers there.

Between 1981 and 1985, the communal experiment was taken to the United States, on a 126-square-mile section of high desert in eastern Oregon. The primary emphasis of commune life was the work of building an “oasis in the desert”. In a miraculously short period of time, the commune built houses for five thousand people and began to reverse decades of damage – due to excessive land use – by restoring streams, building lakes and reservoirs, developing self-sufficient agriculture, and planting thousands of trees.

By the end of 1985, however, local and government opposition to Osho and the commune made it impossible for the experiment to continue. The commune was disbanded and Osho embarked on a world tour, finally returning to India in mid-1986.

By January 1987, Osho resettled in Pune, giving talks twice a day. Within a few months the Pune commune began a full program of activities and was expanding far beyond its previous scope. During this period, the emphasis on meditation grew even stronger- this theme was constantly addressed in his discourses – and he developed and introduced several new meditative therapies, including No-Mind, the Mystic Rose, and Born Again.

Before he left his body, Osho dictated the inscription for his Samadhi, the marble and mirrored-glass crypt containing his ashes: “Never born / Never died / Only visited this planet Earth between / Dec 11 1931 – Jan 19 1990”