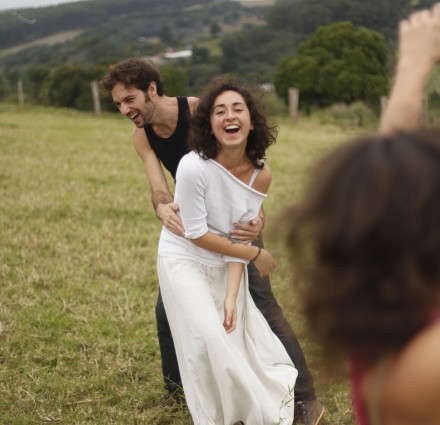 If there is a gift for your sexuality, that is Bioenergetics. Its effects on sexuality are simply incredible. These aren´t just words, since I´ve experienced them in my body. My sexual capability improved greatly. Bioenergetics brings quality to our sexuality. Why? ‘Bio’ means life and ‘energetics’ means energy, so that is the energy of life! Through its exercises connected to breathing it aims to unlock your energy of life, your fundamental energy, your basic energy. As to understand it more deeply, look at a child. It has a lot of energy, she/he simply can´t stop even for a second!!! Its basic energy is totally opened. Little by little what we call civilization starts blocking, cutting off, limiting its energy. A child can´t shout or run, can´t touch him/herself, can´t make noises because it will bother his/her relatives. This fundamental energy stays there, locked inside. Inside our fundamental and basic energy, there is our sexual energy.

I was generated through a sexual relationship. Tell me how sex can´t be called a fundamental energy!!! How the universe, God, the Creator, or whatever you want to call  this Being, would be so stupid to generate a human being out of an energy that wasn´t good? Out of a perverse energy? Bioenergetics activates this energy and thus it wants to move around. Like a child, who wants to get out. I have 2 grandsons, Caetano e Lorenzo. The youngest, Lorenzo who is 2 years old, only wants to go out! He wants life, wants to walk around, he wants to breathe he wants air! When he sees me, he calls the chicken, what is only as excuse. He doesn´t want to see the chicken, actually He wants to go out, see the trees, the green! This is a living impulse. The dead want the concrete, the shopping malls, the cold light. This vital energy, when moving again, will kick out everything you have been holding back, everything that stops your energy from flowing. The cleaner you get, the more energy you have flowing. You start having more physical and emotional capacity, more pleasure in your body.

Loosening up your pelvis is very important when having sex. The whole of Europe is fascinated by African women because their pelvis moves freely. African men also move their hips and women get very attracted to them as well. It brings up their sensuality.On the other hand, Europeans are popularly known as stiff and mechanical in bed, which  represents the toughness and rigidity of such civilization. The stiffness of a body is its coldness. Bioenergetics will undo or dismantle this rigidity, this toughness. That’s why doing Bioenergetics is fundamental to the sexuality of any person. Also because Bioenergetics isn’t an invention. It’s based on natural movements of the human being body. It brings back your natural breathing and movements that once were in your body. It doesn’t put anything in you, it only brings things out of you. A sentence like “They’ve filled your head full of nonsense in Bioenergetics” simply doesn’t exist. It’s the same kind of chat of those reactionary people who say that communists eat children!

Bioenergetics brings up and out everything that is bad in your body and emotional system. When these all are out, what’s left is you as a very nice human being, very capable, sensual, very loving, kind and generous. This is the truth, not that religious chat from church about sins and so on. They are bullshit to exploit and deceive you, only to make you to pay the church fee, so that you get “clean” and go to heaven!

Bioenergetics is a great gift for you and your sexuality. It is intense and goes so deep that doing Bioenergetics you can even have an orgasm, which has already happened to many people. A real ecstasy, since this living energy flowing through your body will give you the present you deserve.